English
twitter stream of MOGiS e.V. (@MOGiS_en)
Please feel free to retweet this page by clicking here
We are MOGiS e.V. - a German organisation of victims of sexual child-abuse. MOGiS has been established in April 2009 as "MissbrauchsOpfer Gegen InternetSperren" (which could be translated as: "abuse survivors against internet blocking"). We are opposing the blocking of webpages as a means to tackle the circulation of the images of sexual child abuse on the internet. What we are demanding is international cooperation on the removal of images of sexual child abuse from the internet. One positive example for this kind of cooperation could be the INHOPE network of internet hotlines.


Actually we have been surprised by the early leakage of the proposal of the Council of Ministers of the European Union. This webpage will be enhanced with references and facts continuously. If you want to network or have any questions, remarks or even have access to blocking lists in other countries, please do not hesitate to contact "info.eu (at) mogis-verein.de".

Because of the proposal of the European Commission the mandatory blocking of websites is being discussed in the European Union again. The EU member-states are about to be obliged to block the access to certain websites using a secret blocking list that is being exchanged by the police forces without any involvement of the member-states' justice system.

The EU-member-states will obligate their national ISPs to manipulate the name resolution (DNS) for their citizens based on the secret blocking list. To implement this infrastructure the ISPs have to make changes to their core infrastructure (the nameserver). Once the blocking scheme has been implemented it can be used to restrict the access to any website.

So first lets get a few facts straight:

So lets have a look on what is being proposed:

Actually this plan seems somewhat lacking. Because only at phase III we see anyone going after the criminals distributing that stuff. Completely missing from this action plan is "freeing the children from their abusive relationships" which should be step 1. If there actually still is a market (like in "money being paid") for that material this could conveniently be bundled with "catching the criminals by following the money".

It's a bit strange and actually quite disconcerting that the EU-member-states are cooperating on assembling a filter list (new-speek for "blocking list") but seem unwilling to cooperate on the removal of the images of sexual child abuse on the internet. It is especially disconcerting that banks manage to take phishing websites down in 4-8 hours, but the images of sexual child-abuse stay in the net for up to 30 days and longer.

To be clear: images that have been removed from the Internet do not have to be blacklisted to be blocked. So instead of blocking the documents of sexual exploitation of children in every one of the 27 member states of the EU it would only have to be removed once by the action of one of the member states. This really cries out for cooperation.

So lets have a look on who works on CIRCAMP:

Lets have a closer look: 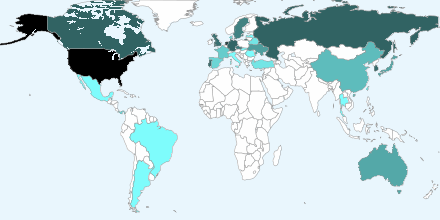 A closeup of Europe: 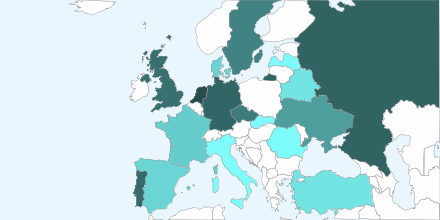 So much about international cooperation on the removal of images of sexual child abuse on the internet. USA and Canada are not what we would usally call a failed state. Interestingly enough Canada is using some blocking technology itself.

The UK as a Co-Driver uses the help of the Internet Watch Foundation (IWF) to assemble a blocking list for the "Cleanfeed" implemented by the british ISPs. The IWF became well known in December 2008 when it put an article in the english Wikipedia on the blocking list because it contained a depiction of the cover of the scorpions album "virgin killer" (which we also find questionable).

Although the Netherlands implemented blocking technology they are always within the top 5 of countries containing blocked sites. What was really disconcerting last year, was the fact that the Netherlands were blocking a website in the Netherlands. This really shows Phase I of CIRCAMP. It's main purpose is just the exchange of blocking list entries. So they did and they just were not acting on the information they got from other COSPOL members.

Another example is Finnland, which is blocking the Finnish security researcher Matti Nikki, who opposed internet blocking in his country by analysing the Swedish/Finnish blocking list and publishing the details of that analysis. The analysis showed that only 37 out of 1047 websites on the leaked blocking list actually contained images of sexual child exploitation. (9 [red] + 28 [orange] from Matti Nikkis analysis)

Talking about our (Germany's) nearest neighbour Denmark: they were blocking 200 web sites from Germany (including some muslim video board).

In the document linked above Germany is still listed as a forerunner, but thanks to the strong grass roots movement of the AK Zensur (Workinggroup against Internetblocking and Censorship) and other civil liberty groups like AK Vorrat (Working Group against data-retention)and "FoeBuD e.V". and organizations of abuse survivors like "Trotz Allem e.V.", "gegen-missbrauch e.V." and "MOGiS e.V." Germany seems to be on it's way out of this madness.

The implementation of the DNS manipulation has been stopped - some of the changes already have been rolled back. Currently the German parliament is discussing the abolition of "blocking" in favor of "removing". This actually could be one of the reasons why blocking is now being proposed on a European scale by the Spanish EU-presidency.

As looking away is just what happens in families (or organisations) when a child abuse is being uncovered MOGiS' slogan is:

That is what we have consistently and by now quite successfully been communicating in Germany throughout the last year.

So now it's time to tackle the problem of web-blocking on an international (at least European) level. We have to network and unite against the advancing restriction of civil liberties all over the world.